Back in October, the BBC organised a hackathon as part of their newsHack series. This time, they focused on Conversational User Interfaces (CUI) and, for the occasion, invited other news organisations to take part. The FT joined in with a pluri-disciplinary team (editorial, UX design, software engineering).

At the end of the 2-day event, we had a prototype ready for FT Conversation, an application running on Google Home, with our users' comments at its heart.

After hearing about various tools and CUI challenges, we set out to find what would benefit the FT in that area. We were able to group our ideas in three over-arching themes:

Discovery: Why not take advantage of our FT Weekend recipes and offer a cooking companion? Alternately, we could provide restaurant reviews, or even exhibition or events suggestions

Navigating data (through audio): How can we envisage audio charts? This task felt too titanesque to undertake in a couple of days.

As we went on, it became obvious that most suggestions were revolving around people's interactions; with various ideas around fact-checking, offering context, feedback and comments. We settled on exploring a few of those ideas, mainly, how voicing comments could enhance conversations, not only with a voice assistant, but with other readers. 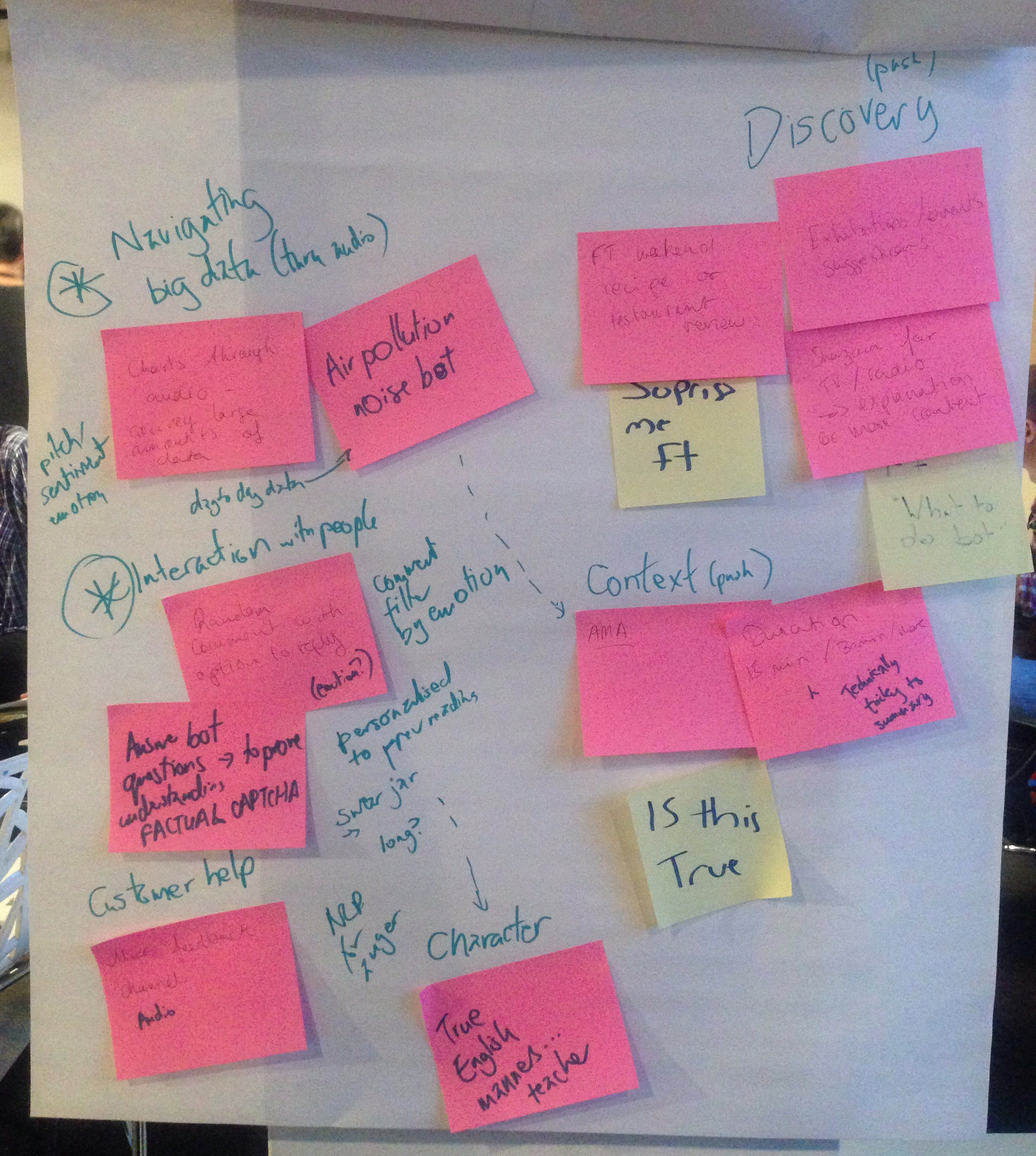 On FT.com, user comments add value to articles. With FT conversation, we wanted to drive user engagement for our readers who already own voice devices. Comments are often free-flowing and we wondered whether it was possible to increase the quality of those comments if they were recorded through a VUI, with sentiment analysis and a "swear jar" built in.

Voice interfaces offer a reflection time while the comment is being read back for approval; the vocal component makes it easier for commenters to see there are humans at the other end, and could foster a rich conversation.

We envisage the app being used during periods of leisure, at home, maybe after a day at work. FT readers would launch the application and be reminded of the articles they've read during the day, and prompted to listen to existing comments or leave a new one. Before someone can post their comment, they must correctly answer a question relating to the article to confirm they have read and understood the article. 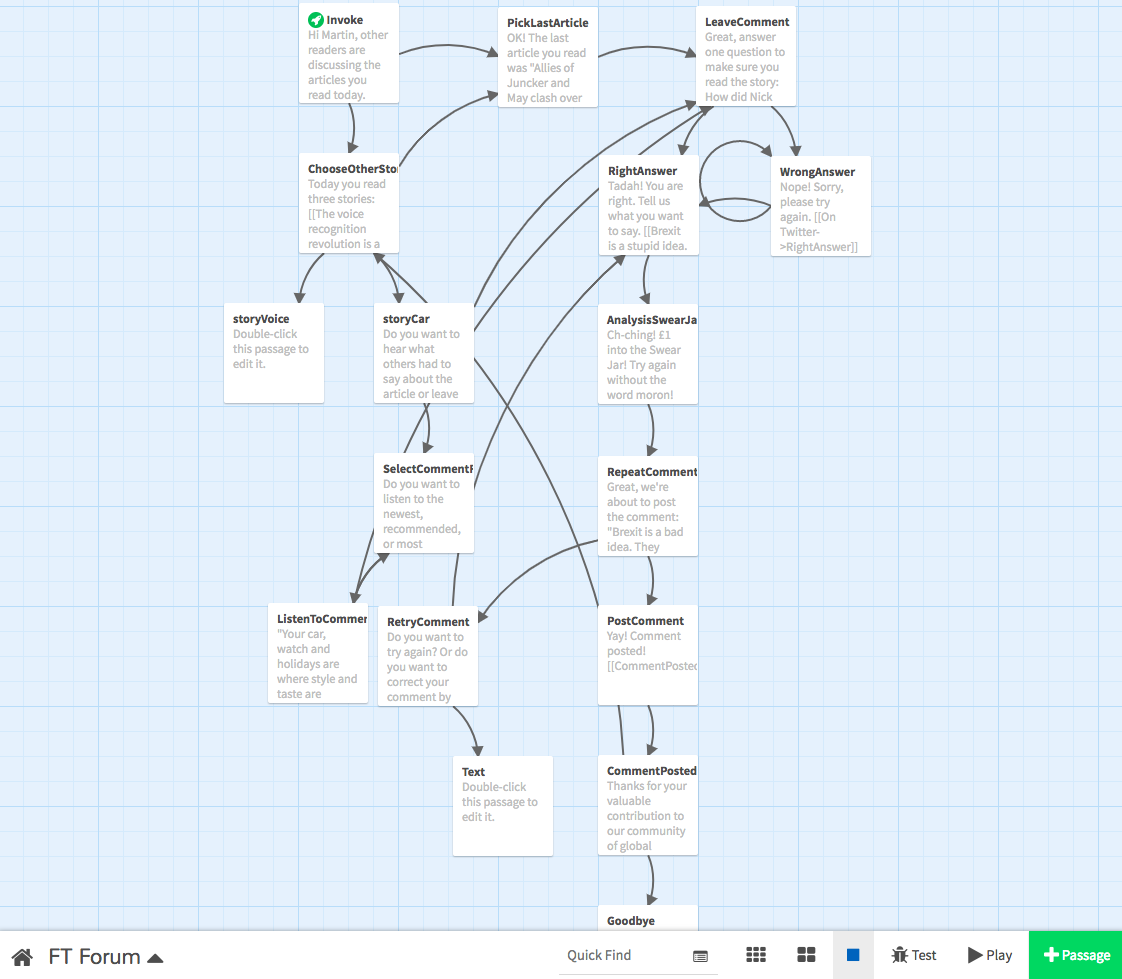 We prototyped FT Conversation to be a Google Home application, as we were getting close to launching Make Connections at the time and were already familiar with the platform. We also used Twine to map out all the interactions within the app. We have found the tool useful in the past to help identify dead-ends and grey areas.

In our demo scenario, the user gets told which article they last read and if they'd like to leave a comment. If they choose to do so, they get presented with a question relating to the article. Due to hackathon settings, only a few questions were written for selected stories. If they answer correctly, they can record a comment which will be translated to text and posted on their behalf. Before the comment is posted, it is analysed through an API we built on the day, using the Natural Language Toolkit (NLTK) that returns the overall sentiment and how many swear words the message might contain. It gives the user time to ponder whether they want to post their comment or change it.

Even if the comment contains swear words, they can go ahead and post it, but they will be charged a small fee, which we envisage going to charity (most certainly, FT's Seasonal Appeal). 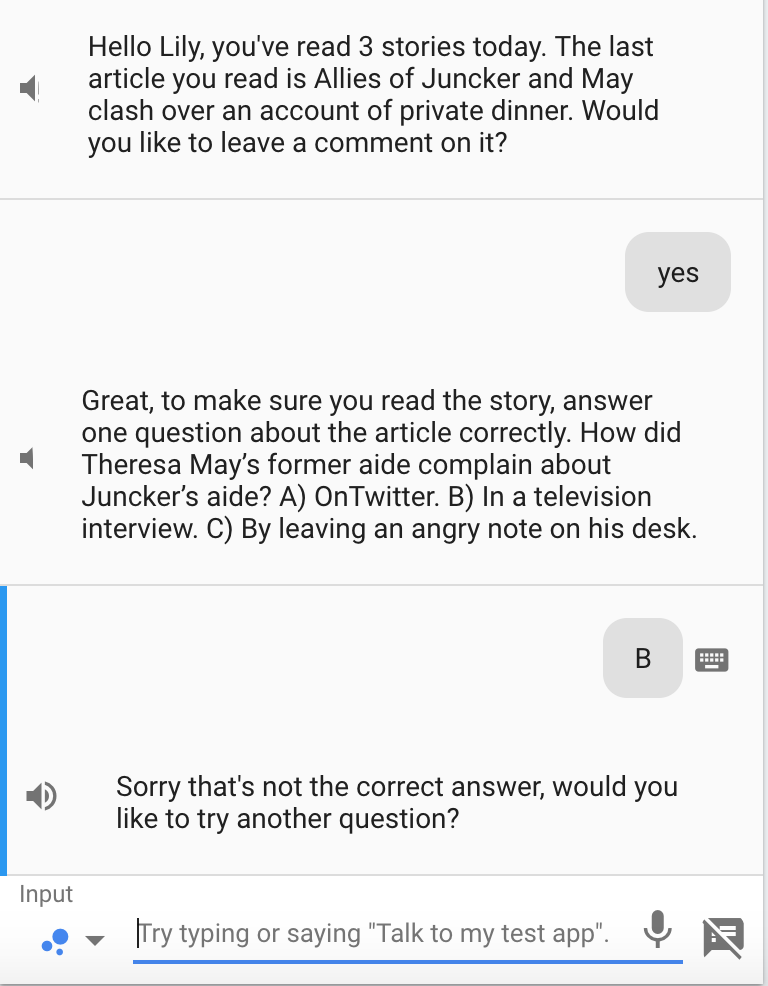 Given the hackathon setting and timeframe, we had to focus on a specific user journey, with some hard-coded data; although the structure is now there to put all the discussed features in place if we so wished.

As part of FT Conversation, we had in mind an audio playback element, where users could choose to record a comment in their own voice. Without having explored the possibility of recording audio, playing an existing mp3 proved impossible.

Finally, we need to bear in mind that users will want to edit their comments and provide them with tools to do so. Changing one word in the middle of a paragraph isn't simple with just a voice interface (could we envisage a companion app on a screen for this particular task? Or make use of the Echo Show for an Alexa version). In any case, we must ensure comments aren't automatically posted, and put in place safeguards to avoid this kind of scenario, encountered by the New York Times.

FT Conversation is a proof of concept, although we currently have no plans to take it further. At least, until we can overcome the challenges mentioned previously. Putting it in place would require an extra effort of curation, to produce a handful of questions for each article, or could we automate those? That is another area to explore.

Sometimes it isn't about whether our users would want or benefit from this specific capability, but each new prototype lets us discover more possibilities and opportunities with voice devices, as well as highlighting where our own data and systems need attention.